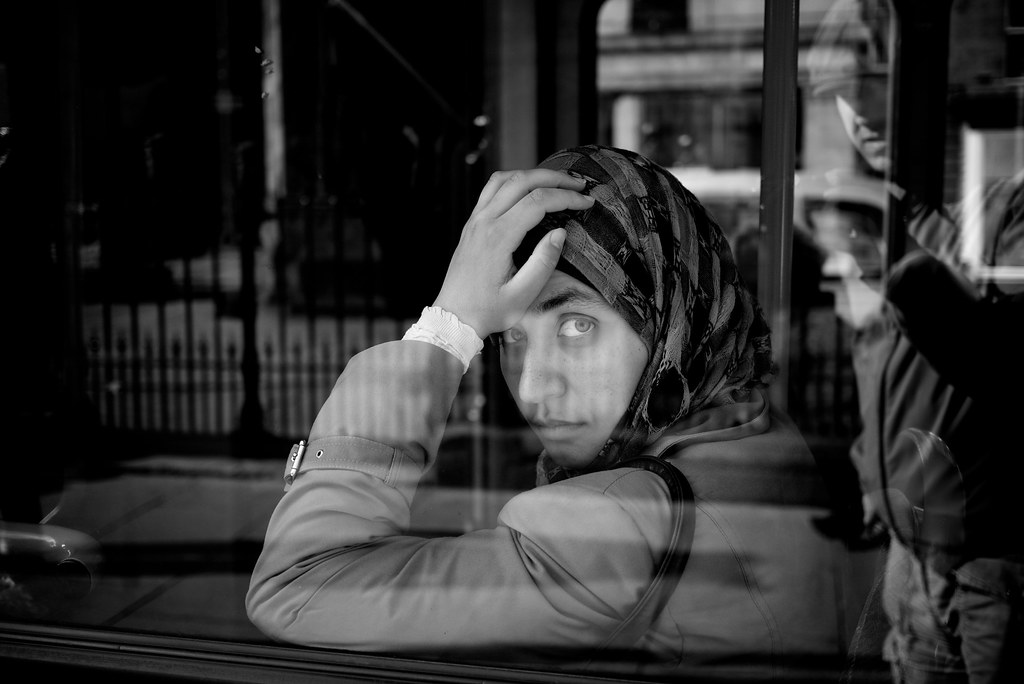 Thomas Leuthard is a friend. We do not know personally, but we are in touch through facebook.
We don’t have known each other a lot, but he did not make me miss his esteem. And I have to thank for his help in a particular period of my life and photographic career. The following interview makes us know a little better.

Hello Thomas, once and for all explains your username 85mm that creates so much confusion in some street photographers.
Yes, it was in May 2009 when I bought a new 85mm lens for my Nikon D90 and decided only take photos on the street with this lens. I didn’t thought about getting closer and shooting full scenes in the future. So I created profiles and a web page with this name. But I don’t shoot with the 85mm lens on the street anymore. Maybe when Nikon brings out the D800 which is full frame I will make my candid portraits with an 85mm lens. Then the name will work again…

Many of your photos are taken in Germany where I have heard of very restrictive rules for people to take pictures in public places. Is it true?
Well, there is always a lot of talk about rights on the street, but I’m not sure if it is really so hard. I couldn’t find anyone who could tell me how it is. I never had problems so far and published more than 1’500 photos online. One day it will happen and then I know what the law will be.
How much more difficult has your street photography become over the last ten years, with the increased suspicion over photography in public places and overzealous police and security guards?
I do this since 2.5 years, but within this time it didn’t get any harder. The more cameras and tourists with DSLR’s are out there, the easier it gets. Maybe one day there will a law against street photography and then we will have problem.

For a long time you shot with a Panasonic GF1. You recently bought a Fujifilm X100, preferring this to the Leica M9. Also thanks to your books, I know that you prefer to entrust to autofocus…
I love my GF1 although the image quality on the X100 is better. But I will sell the X100 soon and will buy the new Lumix GX1 which will have a better autofocus and ISO values. It’s everyone’s own decision what to use to shoot in the streets. For me an autofocus with face detection which can be triggered with a touch display seems to be very handy. Sure this is far away from traditional photography, but it helps to get the job done. Since you don’t see the way of focussing in the photo, I do not bother how it was done. It’s the end result which counts.

You are an advocate of shared knowledge and the creative commons. Do you want to explain to our readers because the culture “open source” is applicable also in photography?
One day I have realized that I cannot sell my photos. People love them, but nobody would buy a print or a book. So I decided to give it away for free with the hope that people will use it in blogs, web pages, advertising, etc. This will help me getting more famous since money will not drive me at all. I’d rather let 10’000 people download a photo from me than just 10 buying it. So it will be visible from 10’000 places which will bring me much more.
Photography is not different than any other source of information. Images schould be free and the information to learn photography as well. Street photography should be affordable to anyone interested. That’s why I give away my work completely free of charge.

We come to you contest launched for the month of December on flickr. Theme “Headlines”, attractive prizes (1st prize USD 500, 2nd prize USD 250, 3rd prize USD 100), rules aimed at didactic utility.
I wanted to make a long term project with the theme “Headlines…”, but then I decided to make a contest and to have this as a title. For me humans together with text is often a very strong stylistic device in a photograph. It must not only be people reading heavy newspapers, but it must contain some strong words in the streets combined with some human action. Regarding the prizes it was difficult to have prizes which you have to ship physically. I also didn’t want to go begging for sponsoring. I just wanted to make this on my own. Therefore I donate the money myself. I hope that a lot of people will participate. Maybe there will be a book with 50 photos of “Headlines around the World”. This is not sure yet, but would make sense.

Street photographers and web. We know between us globally, connected through the various networks like Flickr, Facebook and now also google +. Do you think that might arise in the future a common project?
Sure. Already my contest jury was built on people I knew from Google+ and which don’t know each other. I know all four of them, have met two of them physically, but admire them all. In the future there will be a lot of virtual projects being created with the help of social media. Even my contest is virtually only. You cannot send in any photo, you have to upload it. I will not meet anyone of the participants nor of the jury.

How do you respond to those who say that your photos are environmental portraits that street photography?
I don’t really care what people say. I do what I like to do and if they don’t like it, it’s not my problem. Vivian Maier is also called street photographer although he was often just documenting life in public. I sometimes just go a bit closer that you don’t see what the person is doing or wearing. If you want to make it right for everyone, you would not have time to take photos.

Where is it going street photography? And where is it going Thomas Leuthard? Do you have any project in the future you’d like to talk?
Well, I was in Munich over the weekend for a charity workshop. I guess there will be more work towards this topic. I want to give the street something back and help with my photography to get some people from the street a better life. I have enough resources to live my life. So I should donate some of my luck and happiness to the ones who don’t have it. It’s all about caring and sharing.
After meeting a lot of people during workshops and street tours, there are some good people becoming close friends. With some of them I would like to travel for the sake of street photography. Traveling was always a pleasure, but I seldom had a good travel partner. Therefore my next trips will be organized better and I will ask some street photography buddies to join.
And later today I will send a letter to Panasonic with some GF1 photos attached to ask for a sponsorship of a new Lumix GX1. It’s not that I couldn’t afford it, but I want to figure out, if you can convince people with good photos to sponsor yourself. It’s a challenge, like taking photos on the street.

Well, if you want see more images by Thomas Leuthard:

All images courtesy by Thomas Leuthard

Posted by alexcoghe on 14 Nov 2011 / 0 Comment
These are early days for me with the Samsung NX200. I belong to a special program in which selected photographers have received this camera directly from Korea. I’ll have to work a lot.

The package is inclusive of standard optical 18-55 and a flash.

The sensor almost frightening: we speak of an APS-C CMOS 20.3MP and the camera body is metal. This is a similar size camera models from Sony NEX.

The interesting thing about NX concept of this approach is certainly designed to simplify user operation. The result is certainly minimalist and aimed at gathering support to users coming from p & s but at the same time it doesn’t limit the potential for advanced users.
The key to this is called ‘Smart Panel‘, which offers a quick and clear access to all the shooting settings.

The design is minimalist, have tended to take advantage of the optical system with the i-setting function that allows a choice directly from the lens.

I must say that the camera body is very good, solid and light at the same time. It seems ideal for those who make street photography like me.The 18-55 lens is not the best of life. This is the remnant of a standard lens, the kind that are included in many cameras for sale in kit package. The result is that in my opinion the lens is disproportionate to the body. I then see it always from the point of view of the street photographer, this lens does not satisfy me. I admit to be using it only in its lowest focal range, at 18mm, 35mm equivalent of a 27.
For the future I do not hide that the 20mm f2.8 pancake  would be more congenial to my photographic approach, or 16mm f2.4.
Coming to the files generated by this machine, the image quality seems really good. Excellent also the jpg generated (usually work with raw + jpg jpg black and white) but there is some point to make.
I found it strange that the files, Srw ( the Raw samsung files) are not supported by Mac.This is something very negative in my opinion, considering that many photographers are, to use these computers instead of Windows.
To work the files i’m now forced to use the software included on the CD, forcing me to give up my normal workflow with Adobe Lightroom.Another problem in my opinion are files that occupy so heavy that far too many resources: with a dozen files i have reached 700mb!
With the firmware upgrade the slow files write on camera seems to be resolved.
Another pro: the very wide range of choice on options for resolution and file format is definitely good.I omit the many options to choose from to create fun photo frames like that mean so little to me, and count only like nice toys for beginners.
The continuous shooting speed is very impressive. It will definitely useful on several occasions, although I hardly ever shot in this mode.

The AF seems quite reliable, whereas at least a few tests I’ve done yet.
Another very interesting feature is Panorama, which unlike other machines where you had to provide “glue” the images you are using software, the system here is much less cumbersome and even most reliably by hand.

Considering that it is first impressions, I consider NX200 a very good mirrorless. Compact and minimalist, lends itself to being a good camera for street photography.

What it does have the speed even though they are eager to use it with a view primary, more responsive to my needs.

Samsung, in my opinion, if the stated goal of wanting to point to the pro market will make the necessary adjustments on some factors, see the compatibility with Mac.

For RAW elaboration we can use only samsung raw converter (Mac users);