Mexico and photography. An intense dialogue that generated masters of photography, renowned in the whole world: from Manuel Alvarez Bravo with his wife Lola, to Henri Cartier-Bresson, who stayed for a extended period in Mexico City, up to Edward Weston and Tina Modotti, who, linked by an intense love affair, arrived in Mexico when the country was living a true cultural and political turmoil following the revolution of 1917. Ignacio López Bocanegra, better known as Nacho López (Tampico, Tamaulipas 1923 – Ciudad de México, 1986), was a history instigator and a creator of a photographic vision that drew inspiration from the historical and political context of the period, and who worked intensively all his life producing more than thirtyfive-thousand photographs and three-thousand slides. Very little is known of this enormous archive. Nacho can not only be considered a photographer, but also a film-maker, photojournalist, documentarist, professor and critic.

Most of his work as a photographer was concentrated in the ‘50s although the breadth of his prolific production extended between the ‘40s and the first half of the ‘80s. The last five years of his life, however, were distinguished by a different phase, not detailed by historical biographers, but yet considered to be terribly important for the history of photography: the role of Lòpez, in fact, was influential to all new- born groups of photographers, who were organized together to define their conceptual and technical ideas. As a critic, Lòpez opposed certain schools of thought predo- minant in the period, in particular that of the Primer Coloquio Latinoamericano de Fotografia, since he asserted that the mentioned school had inspired ideas and intentions that were against his ideological principles. As early as 1979, in an arti- cle published in “unomàsuno” entitled “Cuestionando al Consejo Mexicano de Fotografia” he asserted: “If photographs exhibited in a museum exhibit are not accompanied by a criti- cal position and strong contrast in terms of aesthetic langua- ge, their risk is that of becoming mere folkloristic objects, a product of turistic subculture”.

And continuing: “Beauty is cer- tainly not that of a landscape, of folklore, dance, architecture, nude, ecc. […] To speak of beauty is to mistify reality. It is to deceive what is evident: the misery of our people is in contrast with the aesthetics of the pure beauty photographer. […] Photography is principally a means of documentary expression in which contents should prevail on aesthetics and that can only become a true form of art when it reflects timeless values that can be shared among most people, since I feel that the mere game of aesthetics is a sterile operation”.

By applying a very personal vision of the city and of the time he was living, Nacho Lòpez figured as an active testimony of the transformation of a society in costant change. Filtered through his lens, light gave birth not to simple pictures but to true stories. And he was able to render this at times with a surreal and at others with a iper-realistic point of view. 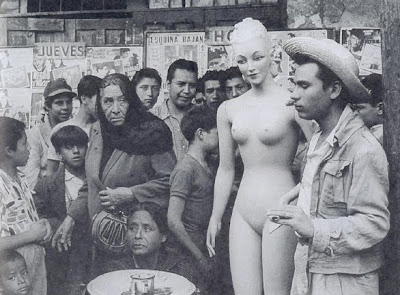 The end result of this work has become an archive of pho- tographs depicting Mexico City’s numerous contradictions: phantasmagoric, hazy and bright, full of joy and brio, famous for its anonymity, divided in districts and roads, festive, libidinous, labouring, brave, lazy, ritual, anarchic. The adjectives link together well, yet they only just brush the world of Nacho Lòpez. Carlos Monsiváis. Lòpez’s through research of aesthetics and contents is an important milestone for photography world-wide, to consider with absolute respect not only through the observation of his shots but also, if not most importantly, through the understanding of his ideological principles in his way of telling stories through images.

This article was written originally by Alex Coghe for Hyde Park Photography Magazine. All rights reserved.
All images copyrighted by Nacho Lòpez Foundation